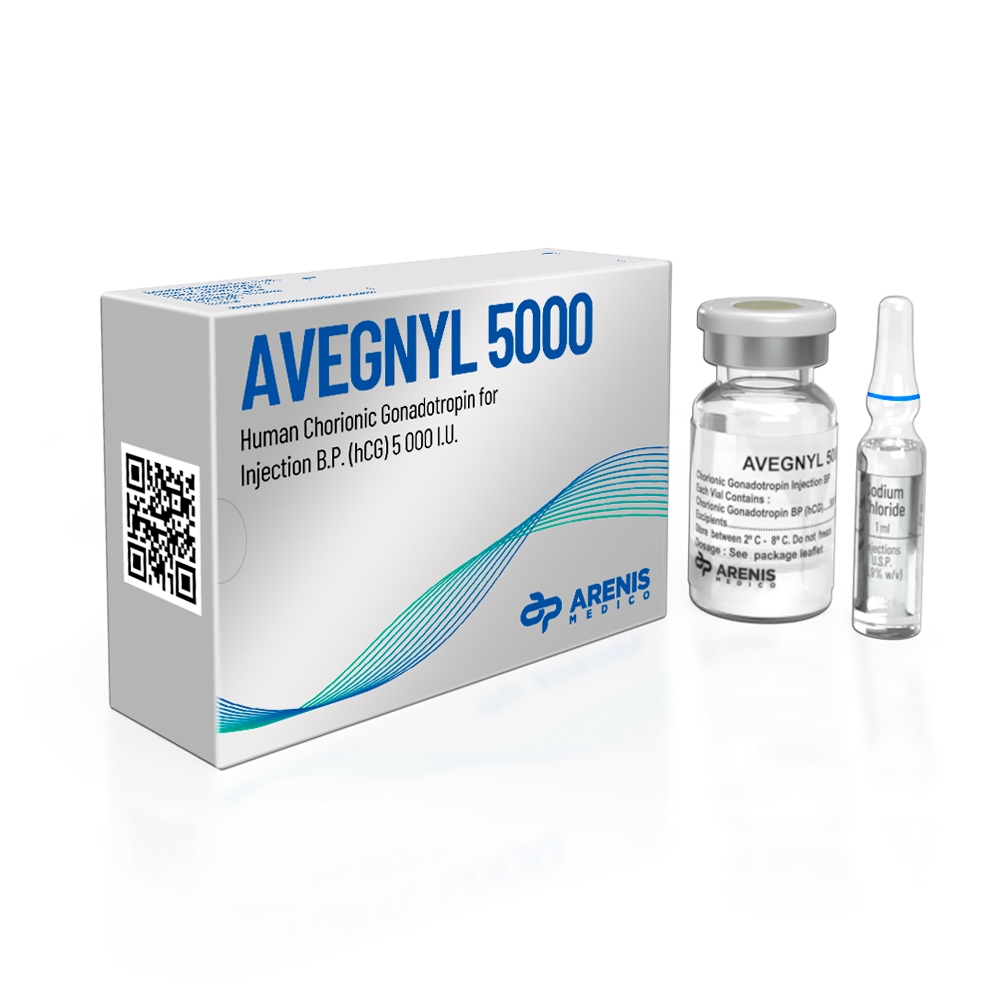 Avegnyl 5000 (HCG) is a prescription medication containing chorionic gonadotropin obtained from a natural (human) origin. Chorionic gonadotropin is a polypeptide hormone normally found in the female body during the early months of pregnancy. As a clinical drug, HCG is used as an exogenous form of LH. It is typically applied to support ovulation and pregnancy in women, most specifically those suffering from infertility due to low concentrations of gonadotropins and an inability to ovulate. HCG is also used with men to treat hypogonadotropic hypogonadism, a disorder characterized by low testosterone levels and insufficient LH output. The drug is also used in the treatment of prepubertal cryptorchidism. HCG is used by male athletes for its ability to increase endogenous testosterone production, generally during, or at the conclusion of, a steroid cycle, when natural hormone production has been interrupted.

Human Chorionic Gonadotropin is generally given by intramuscular (IM) injection. The subcutaneous route is also used, and has been deemed to be roughly equivalent therapeutically to IM injections.

When used to treat hypogonadotropin hypogonadism, either a short 6-week program, or a long-term program lasting up to 1 year, depending on the individual needs of the patient.

Athletes use hCG either on cycle, in an effort to maintain testicular integrity during steroid administration, or after a cycle, to help restore hormonal homeostasis more quickly. Both types of use are deemed effective when properly applied.

Human Chorionic Gonadotropin is often used with other medications as part of an in-depth Post Cycle Therapy (PCT) program focused on restoring endogenous testosterone production more rapidly at the end of a steroid cycle. If used for too long or at too high a dose, the drug may actually function to desensitize the Leydig’s cells to luteinizing hormone, further hindering a return to homeostasis.

Athletes may also administer Human Chorionic Gonadotropin throughout a steroid cycle, to avoid testicular atrophy and the resulting reduced ability to respond to LH stimulus. In effect, this practice is used to avoid the problem of testicular atrophy, instead of trying to correct it later on when the cycle is over. It is important to remember that the dosage needs to be carefully monitored with this type of use.