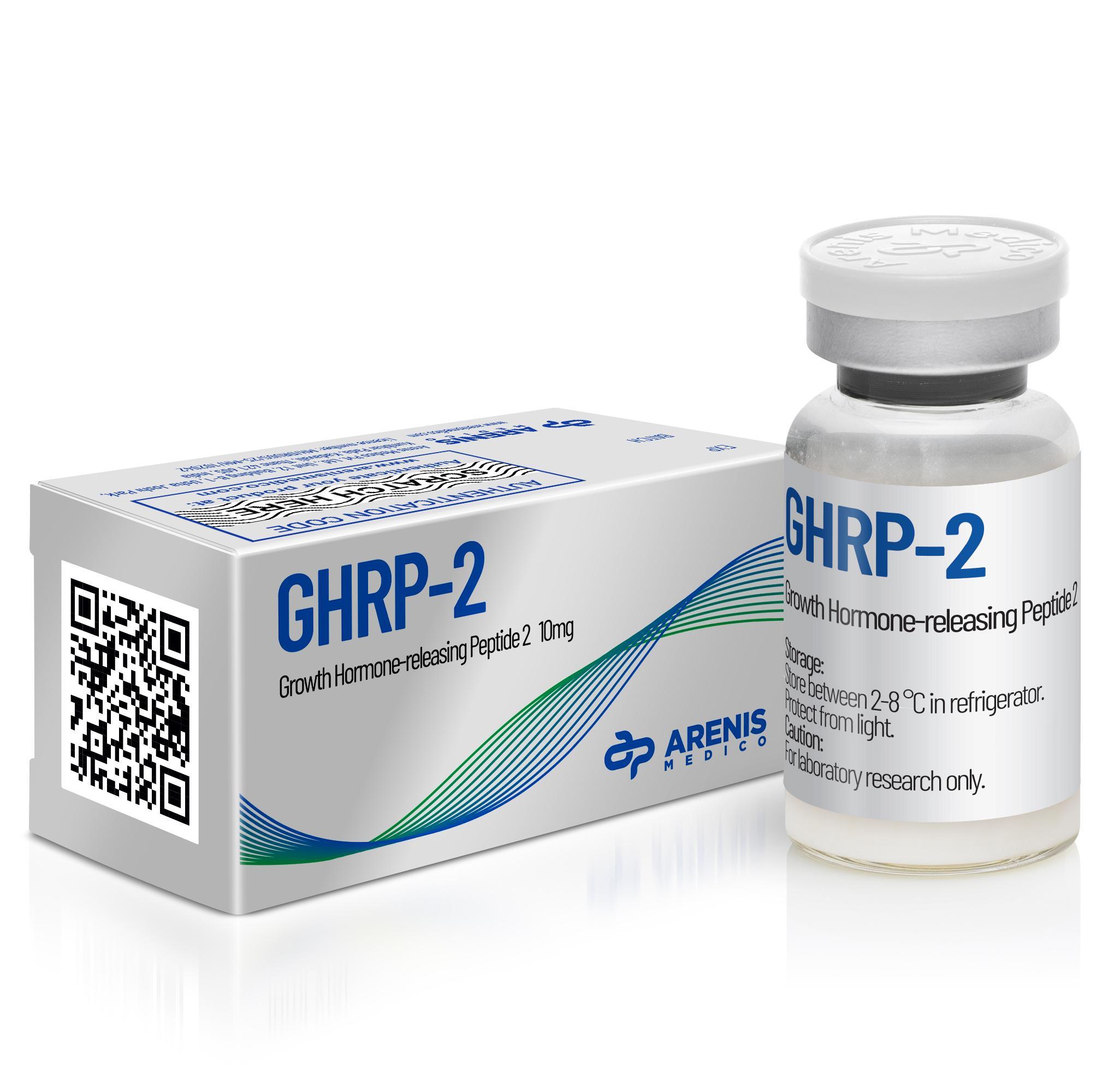 This drug belongs to the Growth Hormone Releasing Peptides (GHRP) class. These are all synthetic compounds that mimic, to some degree, the effects of ghrelin, an endogenous gastrointestinal peptide hormone. Ghrelin is secreted by the stomach at times of fasting (when unfed). This hormone stimulates receptors in various tissues including the hypothalamus, pituitary, and other regions of the brain, the sympathetic nervous system, the stomach, heart, pancreas, liver, and intestines, and even adipose tissue. Ghrelin is most generally involved in the regulation of food intake, body composition, and glucose metabolism. Among other things, it has been shown to stimulate appetite, influence taste, modulate sleep, stimulate gastric motility, emptying, and acid secretion, promote lean body mass retention, improve cardiac output, reduce inflammation, increase plasma glucose levels, and alter peripheral insulin sensitivity. GHRP-2 aids in the promotion of natural growth hormone production in the body, which carries with it numerous performance as well as health benefits for the user.

Common side effects to GHRP-2 therapy include flushing, sweating, sleepiness, increased Gl motility, and increased appetite. Also frequently reported are adverse effects typically associated with other types of growth hormone therapy, such as water retention (edema), joint pain (arthralgias), carpal tunnel syndrome, and numbness or tingling in the extremities. Note that the incidence of side effects tends to be lower with GHRP therapy as compared to traditional hGH. This is because GH/IGF-1 release is subject to endogenous synthesis, and as such the drug is less amenable to overdosing.

GHRP-2 may reduce insulin sensitivity and raise blood sugar levels. This may occur in individuals without preexisting diabetes or impaired glucose tolerance.

Estrogenic side effects of GHRP-2 should not exist as the peptide does not cause any aromatization. However, gynecomastia in sensitive individuals is still possible.

Hair loss and acne are not possible, nor are virilization symptoms in women.

There are no negative cardiovascular side effects associated with GHRP-2. Many users may find their cardiovascular health improves with elevated levels of growth hormone. GHRP-2 will not suppress natural testosterone production.

GHRP-2 is not toxic to the liver and will produce no liver damage.

The most common side effects of GHRP-2 will be an irritated injection site. This will normally remedy itself by finding new areas of the body to administer the peptide. Some users may also experience swollen ankles or wrist as well as carpel tunnel like symptoms when use first begins.

Some users may also find issues with blood sugar control and may need to adjust their diets accordingly. Such blood sugar issues may produce mild to severe headaches.

Elevated levels of cortisol are also possible but are normally only associated with very high doses, such doses should be avoided.

GHRP-2 comes in dry powder form and needs to be reconstituted with bacteriostatic water. The compound may be injected subcutaneously (under the skin) or intramuscularly (into the muscle) depending on individual preference. Once reconstituted, GHRP-2 must be kept refrigerated.

For optimal results, the user will find two injections per day on an empty stomach to be best. If done subcutaneously this should prove to be the easiest method as it will be the least intrusive.

When used for physique- or performance-enhancing purposes, GHRP-2 is usually administered at a dosage of 0.1 to 0.3 mg (100-300 meg) per injection. This may be given 1 -3 times daily. If single episode dosing is preferred, this is taken before sleep. Day dose(s) are taken on an empty stomach, 30-60 minutes before feeding. This is to preserve optimal GH release, as elevated plasma fatty acids and/or glucose may blunt the GH elevating effects of GHRP-2. Total daily dosage generally does not exceed 900 meg.

It is common to taper up the dosage, beginning with 100 meg per injection. The dosage may then be increased in increments of 50 meg every 3-7 days, until a stable dosage is reached.

Cycles of GHRP-2 usually last 3-4 months in length, though programs of 6 months or longer are not uncommon. Although desensitization to GHRPs may occur over time, this drug appears to maintain an acceptable level of effectiveness during longer cycles.